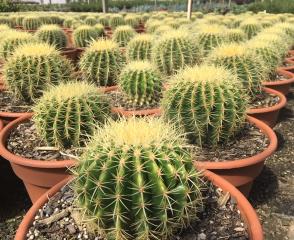 Growing as a large roughly spherical globe, Echinocactus grusonii may eventually reach over 1 metre (3.3 ft) in height after many years. Younger Golden Barrel plants do not look similar to mature specimens. The generation lifetime is estimated to be around 30 years!
There may be up to 35 pronounced ribs in mature plants, though they are not evident in young plants, which may have a knobbly appearance. The sharp spines are long, straight, or slightly curved, and various shades of yellow or, occasionally, white.
Small yellow flowers appear in summer around the crown of the plant!